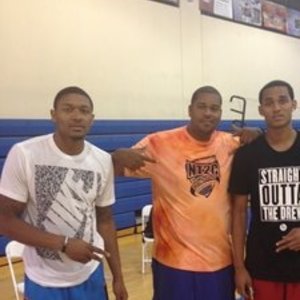 I am founder of NoTime2Chill Skills Academy, a organization dedicated to improving basketball skills of all ages from beginner through elite player.I am a current D2 College Coach View all coaching experience

Andre T. Chilton is the owner and founder of NoTime2Chill Academy which is based out of Suisun, California. NoTime2Chill Skills Academy is a organizations which are dedicated to improving basketball skills of athletes of all ages from beginner through elite player. We teach athletes fundamental, intermediate, and advanced skills, maturing their basketball intelligence and game time performance as well as equipping athletes with the skills necessary to successfully compete at the highest levels. We use cutting-edge technology, offering uniquely structured and personally tailored skills development programs for all performance levels. NoTime2Chill Basketball Academy is the actualization of Andre T. Chilton’s life-long love of basketball. He is an Air Force veteran with an impressive history of playing basketball at competitive levels. He has played at the collegiate level, German and Italian Semi-Pro levels, and All-United States Air Force levels. He also has over fifteen years of experience coaching and instructing basketball skills development training for athletes of all ages.

Andre T. Chilton played point guard and shooting guard in college at Macon College in Macon, Georgia. He was selected to play on All Air Force, Unites States Army in Europe (USAREUR) All Star, USAREUR Army/AF, All Star tournament teams. He also has an extensive history of playing basketball and has an insatiable love for the game.

Players can expect Fundamentals of ball handling, Defense, Post and guard play and when to apply the the skills we train on. Players will learn all positions and the importance of each Position. Players will also have the option if joining the Ultimate Skills Development program. Where they receive personal skills training workouts via email .

patient, kind, and funny. The kids love him, and work hard for him.

He's great. We are very pleased

My daughter really enjoyed training with Coach Andre! Although it was a little difficult to schedule one on one sessions because of his preference to hold group sessions-- we were finally able to connect and may even consider checking out the group sessions in the future!

This was our first training with Coach Andre, he was very professional, and since it was my sons first time the coach was very patient with him. My son said he really loved the practice and wants to plan for several more.

Michael Testimonials: I'd like to thank Coach Andre for his passion in teaching basketball to kids and adults alike.I enrolled my son in his program halfway this summer.He was really "raw" on playing basketball to start with but with only 4 sessions with Coach Andre,my son's ball handling skills have greatly improved.His coach at the summer league even noticed a big improvement in his game after joining Coach Andre's program.I really would recommend his program to all the parents who want to see their kids improve their game.

Coming out of high school I was still a frail skinny kid trying to find my spot in the basketball world. Andre Chilton coached me in 2008-2009 and taught me a low post game as well as a 15 foot jumper. Allowed me to play my game and turn into a all around player on the court. Thank you for helping me live out some great dreams with that ball in my hand.

Playing for Big Chill was one of the best things to happen to me and my game. His competitive spirit is contagious and he brings the best out of you everyday. He had so much confidence in my jump shot that I felt I could hit from anywhere on the court!!!

As a friend, coach, and mentor Andre Chilton has helped guide me from being a player into a coach of my own. His unique styles and techniques allows and player to be able to learn and enhance their skills or their weaknesses. A great honor to play alongside, for, and learn from him.

Playing with and being coached by Andre Chilton has been a great experience. He has taught me a lot about the game. His knowledge has been able help me develop a wide variety of skills. Till this day I still apply everything he taught when I step on the courts.

Playing with and for Coach Chilton aka Big Chill was one of the most informational and enjoyable experiences I've had during my years of playing. He instills a level of confidence in you that some never knew they had. He tweaks your strengths and builds on your weaknesses. To have him as a friend/mentor helped me pass on the knowledge I have obtained to my kids and other kids I've had the pleasure of coaching. #NoTime2Chill is #REAL

During my time as a Coach and a player of the game have I never met anyone as devoted to the game and helping others get better as I have seen in Coach Andre Chilton aka. Big Chilli! Coach Chilton was very supportive of every aspect of basketball during his time in Okinawa as a player and then in coaching. He took over the Oki Ice program from Coach Raymond L. Broughton , a program I formed in 2007 and Ray and Andre took it and made it even better to help the ballers here in Okinawa get better. Coach Chilton was also instrumental in helping my team the Ryukyu Golden Kings with getting our players ready for our season. He participated and helped organize some great ballers to include himself to come to our pickup games and help to make us the Championship team we are today! Thanks Coach Chilton! Continue to share your superior knowledge of the game! Thank you Coach Keith Richardson

Coming into the Air Force I was always an athletic kid. Playing with and for Andre Chilton helped me understand the game in a way that I could maximize the use of my athleticism, while also expanding my skill set into ball handling and shooting. With the assistance of him as a friend and mentor I developed into a player that has won many different championships in different theaters throughout the U.S.A.F. The work ethic, focusing ability, and leadership skills that I learned from him are ones that I still use to this very day.

I have known Coach Chilton since 2001 and during that time I have had the pleasure of playing side-by-side with him and coaching against him, but the most rewarding times were coaching alongside him! He is an extreme professional and his mastery of the fundamentals of the game along with his ability to motivate players makes him a great coach and mentor for players of all ages and talent levels. Coach Chilton's ability to assess an individual players strengths and areas of improvement and subsequently build a development plan specifically for that player is a true talent that only the best coaches possess. His game planning and strategic thinking was critical to our team's success as the 2010 PACAF Champions. Great coach, great mentor, great strategist...great leader!