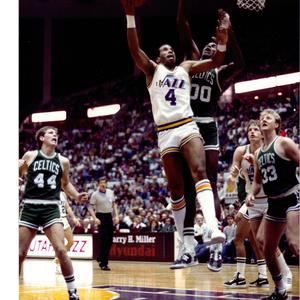 Hall of Fame athlete who has experience and enjoyed success at every level of basketball, including high school college, Olympics and the NBA as a player and coach. View all coaching experience

He played an important role in one of the biggest games in college basketball history, Notre Dame's 1974 upset to end UCLA's record 88-game winning streak.

He was also the leading scorer on the 1976 US Olympic team that captured the gold medal in Montreal.

He was the NBA Rookie of the Year Award in 1977. In Utah, Dantley was a prolific scorer, twice leading the league in scoring (in 1981and 1984

Dantley enjoyed outstanding success at every level of basketball, including high school, college, Olympics, and the NBA. On April 7, 2008, he was elected to the Basketball Hall of Fame.

Dantley later worked for the Denver Nuggets as an assistant coach for eight seasons.

I concentrate on fundamentals, nutrition and the importance of weight training. The sessions usually involve offensive moves, including spot dribbling and one on one offensive techniques.

Coach Adrian is an extraordinary Coach! He is completely focused on improving the Athlete's skills and game. His extraordinary level of basketball knowledge and experience accompany a singular dedication to the Game and improving the game of the Athlete. His recommendations and explanations are vital, extremely helpful and he explains them in thorough detail. No shortcuts. His high expectations serve to motivate the Athlete to improve from the outset, yet he is able to easily relate to the youth Athlete. Extraordinary!