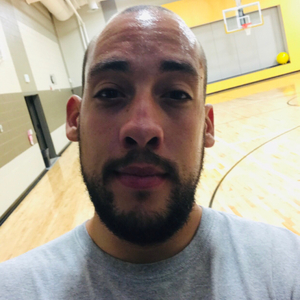 You will receive a (1) hour session indoors at a gym in your area. All sessions include high level skills training, water & Gatorade, and a player evaluation.

You will receive a (1) hour session indoors at a gym in your area. All sessions include high level skills training, water & Gatorade, and a player evaluation.

As a player I was a versatile four man who could step out and shoot, rebound, and distribute

Workout sessions are high intensity and are catered specifically to each athlete and their age, size, skill set, etc. .

No matter what your skill level is I will develop a training plan that addresses your needs and gets you on a path of improvement.

• Front/Back & Side/Side Warmup Dribble- Player starts low with knees bent and back straight. Player first takes a ball in each hand and dribbles balls in and in n out motion back and forth. For part 2 the player switches and goes in an in n out motion side to side.

• Change of Direction Cone Dribble- Place cones in straight line down court a few feet apart. Player crosses between each cone staying low the whole time, w/eyes up, knees bent, and back straight.

• Corner to Corner Layups- Player starts in corner at 3-point line. Player sprints baseline catching pass and finishing with a layup off of the glass. Player continues running through to the opposite sideline turns and runs back finishing strong with another layup. Repeat 60sec. You may also go reverse to increase difficulty for advanced players.

• Speed Layups - Player starts under hoop and speed dribbles out to TOK. Player then turns around and drives lane finishing hard at hoop for a layup. Repeat on both sides of the hoop. 30 seconds on/off x3.

• Triple Threat/Shot Fake/Layup- Player catches ball in triple threat, does an aggressive shot fake, and then puts ball on floor and drives hard to the hoop finishing strong with a layup

• Half Court Ball Spin/Jumper Drill- Player starts at half court and spins ball to cone around 3-point line. Player grabs the ball and shoots a jumper. If player misses they gather ball and go up strong for a layup. After a made jumper or layup player then goes dribbles back to half court performing a crossover at the cone. Repeat for 2 minutes.

• Around The World Jump Shots- Player shoots from 5 different spots around 3-point line or closer. Player then goes back around the word shooting again.

Zach was at the court waiting for us when we got there, he did a great job with our 8th grade daughter. It was a tough workout but she enjoyed it!

Great coach! He has provided very helpful and detailed feedback to help my son improve. He is also very responsive and knowledgeable.

Great coach. Great pace of teaching. Coming back for more

Zach is great with my 12 year old son. My son is improving, having fun and getting a great basketball workout.

Coach Zach is a tremendous asset for my son's development in basketball. Coach is well prepared with a specific set of drills prior to our sessions and is able to keep my son engaged and focused for the entire session.

Coach Zach has been an excellent coach to my son! After just one practice I saw improvement on my son!
I recommend him to anyone who wants a private coach!!!

Great first session with a thorough evaluation and excellent written summary of all areas of the game. He included specific strengths and weaknesses with details about each skill. Clearly Coach Zach has significant coaching experience and tremendous knowledge of the game.

As a parent new to this 1 on 1 training, I must say Coach Zach has exceeded my expectation as well as my daughter's. I have seen improvement after a few sessions with Coach Zach with my daughter's ball handling skills as well as her confidence in herself when it comes to handling the ball. My daughter looks forward to what Coach Zach has to offer. Don't hesitate to jump on training with Zach, you won't regret it.

Coach Zachary is doing a great job with my son teaching him practical techniques and still making it fun. My son looks forward to his sessions with Coach Zachary!

Absolutely amazing experience working with Zach! He truly cares about the development of my son on and off of the court.

Coach Davis truly is the best! He put our athletes needs first and really took his game to the next level.

I am new to Coachup since Coach Davis referred me but I used Coach Davis before and he really is great! He has worked with some of the best coaches around and really has an attention to detail like no other. My child is very new to the game but Coach Davis went full stride and never missed a beat helping AJ to reach levels I never though he was capable of!

We weren't sure if our child would be interested in private instruction but Coach Davis made the whole process easy and affordable! We are grateful for his services and now Kyle loves basketball and is looking forward to his first full season!

Coach Davis went above and beyond in ensuring my child was given proper instruction! We are thankful for him and would definitely use Coach Davis again in the future.