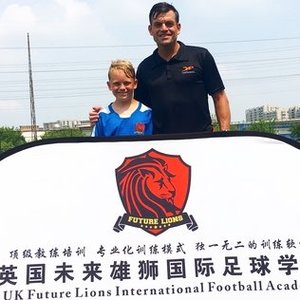 I use targeted objectives so that players will improve technical and tactical skills and leave each session with knowledge that will help to be their best in competition. View all coaching experience

4 session package with Coach Stephen. A pair of goalkeeper gloves and a shirt. $190

4 session package with Coach Stephen. A pair of goalkeeper gloves and a shirt. $190

Masters in Education and Curriculum Development, and additional certifications at the post-graduate level that includes coursework in kinesiology.

My Coaching philosophy is based on giving back to the game that has given me with so much joy and opportunity around the world. My hope is that players that work with me discover in training the knowledge, skills, and goal-setting abilities to help them to successfully continue in the sport at the highest level as well as to create pathways by which they can be healthy contributing members of the community beyond the training grounds and give back to the game in some way themselves.

All levels of keepers repeat the basics, and then build on technique from there:

Generally these basics are broken down to tactical aspects in a training session that are taught in progressions. Examples are:

Recovery from low dives
The Three Goal Situation
Winning free balls with or without pressure
Drop step to high ball save
Providing support, and distribution with feet.
etc.

Coach Stephen is great, really showing my son the fundamentals.

Coach Swanger definately prepares players to be in top form. Love his positive attitude and his commitment to making the players work hard to the best of their ability.

Talan is very happy with his first training session with Stephen. I liked the work out he got in addition to the drills he learned.

Coach Swanger is The main reason my son is improving at soccer goalkeeping. He has taken the time from day 1 to get to know my son, what motivates him, makes him tick and his strengths and weaknesses.
He really cares and my son knows this, My son is very motivated to meet and exceed coaches expectations which makes him better.
Coach breaks things down to the basic nuts and bolts of goal keeping and always pushes fundamentals and next level stuff.
You always get far more than 100%+ effort from him and he is always ON!
When my son Benji makes the high school freshman team, excels at Premier Club soccer and eventually commits to a college team we will have Coach to thank for it.
He is far and away the best soccer/goalkeeper coach we have ever had in the Greater Seattle Northwest are, bar none.

Coach Stephen knows a ton about goalie training. My son has never had any formal goalie training before and was excited to learn some great techniques. Really nice coach as well.

Stephen is a great goalkeeper coach. I would reach out to him if you have a driven goalie who is committed to learning, open to feedback, and who is continually looking to improve. Our son has been working with Stephen for about 4 months at this point, and we've seen dramatic improvement in his technique. Whether it's been individual sessions, small group training, or striker/keeper clinics, Stephen has always challenged our son by pushing him just beyond what our son thinks he's capable of. Stephen has been the right fit for us; if you're contemplating a coach, I would recommend talking to him so you can decide if he's a good fit for your goalie. My only warning would be not to wait...he's always traveling and coaching all over the country, so his schedule fills up quickly!

Stephen is a competent and engaging coach. His style captures and drives expectations of his students. We have had a couple of sessions so far and the growth in our son is visible. We will be purchasing more sessions!

He has been very easy to work with. My son has been a keeper for about 5 years. This coach seems to be taking my sons basic abilities and focus on the next level of progression. We are looking forward to seeing his progression through this program.

My son has improved every time he has worked with Coach Stephen. His footwork has improved along with his confidence. We plan on many more training sessions.

Coach Stephen provided amazing coaching and motivation for my young athlete. His strength and skill improved markedly. Coach Stephen was positive and intense and pushed in all areas of Finn's physical conditioning and keeping skills. Thanks so very much!

My daughter has worked with Stephen throughout this past year. I have seen her confidence, skill level, and dedication to her position increase dramatically. Stephen’s approach and practices I have not seen other coaches use. He always has helpful feedback and tips too. My daughter looks forward to training sessions with him and will continue to train with him as long as we can.

He is a really good coach to work with. He is fun and unique and his coaching style is like nothing you'll ever see. He will help you figure out your errors and overall make you better.

Stephen took great care with my daughter working on her basic soccer skills. After only a 30minute session she was able to kick the ball accurately with Stephen throwing the ball to her. I know that Stephen works with a lot of high level players, but he was really able to connect with my daughter. We will work with him again for sure!

We had our 1st session with Coach Stephen this week. WOW! My 9 yr old daughter loved it. He worked her hard, gave her lots of great instruction, and really took the time to figure her out. She came home wanting to practice all the drills - the living room furniture was moved to accommodate :) Coach Stephen was a great communicator as well - getting back to me very quickly. We will for sure continue on!

Can't recommend coach Stephen enough. My son has had numerous goalkeeper coaches and attended many camps in the past. Stephen has been the best thus far. He was able to pack more training in one private session then some of the day long long camps my son has been too. Stephen goes into great detail and teaches not just how to do something but also the why. He is also able to push my son physically and mentally with the right amount encouragement. Stephen reviewed everything at the end of the session to make sure the retention was there. We will definitely continue training with Stephen.

Coach Stephen is a great GK coach. He gave my daughter a lot of great tips, and sent her videos to watch afterwards showing the techniques. He has a tremendous amount of energy and worked hard through the whole session! I wouldn't hesitate to recommend him.

Coach Stephen did a great job with my 9 year old. just the right touch for his personality, and good hard work out. gave us a lot to work on, and a great platform for further improvements.

Coach Stephen was a great catalyst for my son's work ethic towards goalkeeping. From the beginning to the end of the session, Coach Stephen kept him training and focusing on improvement with great drills and skill building. He gave him great pointers and encouragement to try his best. Coach Stephen was focused, positive, and hard-working! My son got great feedback afterwards, and we are looking forward to working more with Coach Stephen so that my son can become the best goalie he can be! - L. Nor

My 14 year old High School freshman Goalkeeper son Benji has been training with Coach Stephen Swanger from the end of playing for Rec soccer, through Premier Club and now starting High School. He has tried out and been moved up 3 times since training with Coach. His form, fitness and skills stand out whenever he plays due to Stephens training. He gives 100+ percent to the kids he trains and he takes the time to get to know them and their parents. My son beat out 1 returning sophomore and 1 junior to make his high school jv team on the first tryout. He has also risen 2 levels in Club Premier and also fills in on higher levels and age groups in his club when they do not have keepers available. He has also trained and played at local university ID camps (starting at the end of his 8th grade year) with 9,10,11 ,12 th grade players and the colleges’ players and held his own with favorable comments. Without Coach Stephens’ training this would not have been possible. We will be coming back for more.