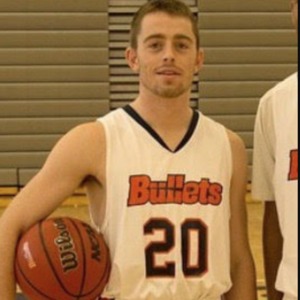 This game has taken me across the world and it was all because of the hard work I put in when no-one was watching. View all coaching experience

In-Person Training for up to 3 athletes

I have always had a strong belief in having a great basketball coach. I have been fortunate enough to play at the Varsity High-School level, be a Captain at the Collegiate and European Professional Basketball level. A major part of my success was due to my basketball coaches and trainers.

2016-2017: While playing overseas, I coached in Ireland, training kids from the age of 8-16 years old. I ran the Coláiste Éanna club organization. Yes, they were Irish and were more into Rugby, but teaching them the fundamentals of basketball was one of my favorite takeaways from my overseas career. I also was a player/coach for the Dublin Business School. We competed at the Division II Level in Ireland and I was responsible for the day day activities, assembling the team and running each practice. (We lost in the semi-finals of the Division II finals.)

2007-2011: I coached every Malvern basketball camp under Jim Rullo. These camps were both outside and indoor, consisting of the basic fundamentals while implementing competitive games and drills throughout the day.

Professional Overseas Highlights (Coláiste Éanna)
-2016: Received the Sports Player of the Year Award for the Dublin Business School. 9,000+ people went to the school and it was voted by both players and athletic staff.
-2016: I was the first American import to play under the Coláiste Éanna Organization. We competed in the Ireland Premier League and I was under contract, while receiving a full scholarship to get my Masters Degree in Business.
-2015: Traveled to France with my college team after graduation, and played all across France against their professional teams.
-2014: One of 10 players that represented the Collegiate USA Select Team for "Global Sports Academy." For 2 weeks we played against professional European teams in Belgium, Amsterdam and London.

A typical session with me will certainly vary based on what the player wants to accomplish. As a guard, I will focus on agility and ball handling. A major area of focus will be developing the off hand, especially for younger athletes. 1-on-1 skills will be provided where I will play defense and offer constructive coaching points. (Vary where we start each possession, and limit the number of dribbles each time.) If the goal on the session is on post moves, we will certainly focus on our footwork and ability to manipulate moves on both of side of the paint. I can guarantee that we will work on shooting for each session. Both set shooting and off the ball. Free throws will be implemented at the end of each session once fatigue is in place.

There are currently no reviews or testimonials for Sean G.