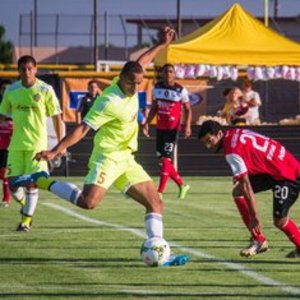 I believe that what you put into this game you will get out of it. Be the best you can be on practice and results will come in the game. View all coaching experience

My name is Ronaldo Teixeira. I come from Brazil. I have been in USA for 7 years now., I have played professional soccer in Brazil, 4 years of college in Marymount California University and semi professional for Albuquerque sol in New Mexico.
At the moment I am coaching college, high school, club, and private lessons.

I am a certified coach with an USSF coaching B license.

As a college player I played for Rocky Mountain College In Billings-MT for two seasons, where I won two conference tournament and qualifications for the nationals twice due that. I also won personal awards such as All-conference, All-region and All American short list in both years.
I also played two years for Marymount California University in Los Angeles-CA for two years, been first team All-conference and All-region in both years and reaching the NAIA national tournament in both years.
I have played the Premier Development League season, playing for Albuquerque SOL FC, where I reached the national playoffs.

My sessions are focused in the development of the player techniques, such as first touch, passing, ball control, conduction, finishing, and etc. Beyond that, I encourage my players to understand more about the game itself, and express themselves to develop their creativity on the game.
In a drill for the player's first touch for example, I will be passing and trowing the ball in different ways and speed to make it more realistic with the game. The player will be asked to receive and control the ball with different parts of its body (right/left foot, thigh, chest and head) while moving in different directions (right/left, forward/backwards, receiving and turning, intercepting the ball, and so on).

Coach Ronaldo is great! He is super good at teaching my daughter techniques.

Coach Ronaldo was very patient with my son. He is a good athlete but needs better footwork, which Coach focused on during the training session. My son said he really liked Coach Ronaldo and will definitely be booking him again.

First training session with my daughter of age 10 made a great impression! Very professional took her in as an athlete and was ready to work his skill level and technique is very high level definitely will be back!

My son Isaac really enjoys training with coach Ronaldo. He has learned many dribbling technics and proper way of controlling the ball to have the advantage against a defender. My son game has improved significantly.

My daughter is 11 years old and started playing soccer at a late age. Coach Ronaldo has really helped her with her footwork and other aspects of her game. After just a couple of sessions with Coach Ronaldo I've seen her confidence handling the ball in games improve dramatically. I will definitely continue sessions with him and look forward to watching my daughter's improvements under his guidance.
Mondo

Coach Ronaldo is a great coach. He is very methodical in training sessions and helps athlete push the limits to help them climb new highs. I am completely satisfied with the training session and would recommend to anyone.

Our son has benefitted from Coach Ronaldo's coaching and soccer skills by understanding what our son needed to work on individually and helping him focus on how he can improve as a team player. Would highly recommend.

Details of the Recommendation: "I would highly recommend Coach Ronaldo as a private soccer coach. He is a talented soccer player with an extensive knowledge of the sport. His positive attitude and calm encouraging demeanor on the field have contributed to the amazing rapport he has with my son. Any player would be lucky to have him as their coach! Service Category: Soccer Coach Year first hired: 2014 (hired more than once) Top Qualities: Great Results, Personable, High Integrity