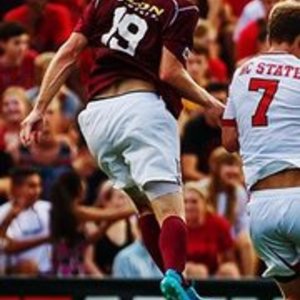 Nathan is an exciting, experienced trainer and soccer player who has benefited from training, and desires to work with youth players to instill a love of the game. View all coaching experience

As a top level collegiate soccer player at the University of North Carolina, and later Elon, I enhanced my skills by being a trainer and assistant coach during the summer. My experience includes coaching an inner city team in Birmingham AL and then progressing to coach girls and boys (U9 - U12) teams at BUSA (Birmingham United Soccer Association) in Birmingham, AL as well as supporting both the UNC and Elon summer soccer programs. Throughout my formative years, I received private training and have been able to incorporate much of what worked for me and what I learned into my own one on one training with aspiring soccer athletes. In order for me to excel, it was necessary for me to dedicate effort to improve my game with individual training. My goal is to provide young athletes with a similar level of training to instill the correct skills and training to be successful.

My earlier soccer was as a member of the US Development Academy which was a feeder organization for the National Teams. I studied under Eric Dade (professional player and coach) and later Oliver Weiss (collegiate coach for UNC). I was the Gatorade Player of the year in Alabama for my junior and senior year. I received a full scholarship to the University of North Carolina to play under Carlos Somoana, where I was a member of the NCAA Championship team in 2012. After playing at UNC, I transferred to Elon University where I lead them to appearances in the NCAAs for 3 out of 4 years. While at Elon I received accolades as the conference Defender of the Year and First Team. While in college I played for various USL teams in LA (OC Blues), Florida (VSI flames) and North Carolina (Railhawks). After completing my collegiate career, I received request to attend the MLS combine, but chose not to continue a professional soccer career, instead choosing to relocate in LA to pursue screenwriting and programming.

A youth work out should be fun, challenging and focused on skills growth. My individually tailored plans include approximately 10 minutes of dynamic warmup to prevent injury. Students will then be expected to continue higher intensity training including close touch passing, dribbling, defending and proper shooting technique. Depending on student age, sessions can also include discussions of strategy and positioning. Sessions will conclude with a review and assessment of the session and a homework assignment for the following session.

Nathan D. has not uploaded any photos yet

There are currently no reviews or testimonials for Nathan D.