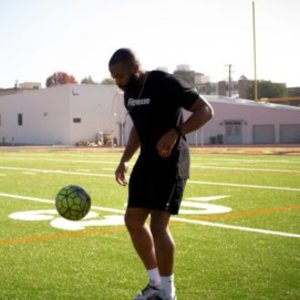 Ex-pro that provides your child with the tools to perform at an elite level every time they step on the soccer field. Training sessions focus on building speed, control & skill. View all coaching experience

I have been training since I entered college in 2009. During the offseason at UC Davis & Virginia Tech we would hold camps and clinics for prospective college athletes from the ages 14-18. This is where I gained my foundation as a trainer as I began to train children in the Davis area. Most of the clients I obtained were children from the ages 6-17 in the Davis area who played competitive soccer for Elk Grove United or Davis Legacy. I did this for the bulk of my college career and kept the same clients until I graduated in June of 2014. Since coming back from playing semi-pro soccer in England (2015) & Germany (2016) I have now settled in the Bay Area and would like to help your child optimize their potential on and off the soccer field.

I was the head junior varsity coach at Bishop O'Dowd from October 2015 - February 2016. We took 2nd place in West Alameda Conference.

I also personal train children and adults in strength and speed work.

I played semi-pro in Nurnberg, Germany in June of 2016. I was offered a professional contract, but declined because I decided it was time for me to get on with my life and start on my career path. I have also played semi-pro in England and trained with the Ghanaian fitness coach and former English Premiership and Jamaican international Jamie Lawrence. Before my time in England I played Division One collegiate soccer for Virginia Tech and UC Davis. I was also fortunate to play for State and Regional ODP, competitive programs like Mustang Academy and Bay Oaks, and also Bishop O’Dowd High school where I played varsity all four years and currently hold the record for most goals in a season (33) and most career goals (61). My early career set the foundation for me to play college soccer and semi-pro soccer in England. Being in England and training with former English Premiership players and coaches has showed me a whole new side to what is needed to be a top-level soccer player.

My session plan focuses on building technical ability at high speeds. The first session will be an assessment to see exactly what your child strengths and weaknesses are. After the first session, we will start focusing on improving the weaker areas through drills which will change everyday. I believe that focusing on a child's footwork and doing all drills at the highest speed will lead to vast improvement in a short amount of time. I am confident that you will see dramatic improvement in your child’s fitness, technical ability, shooting, first touch, and awareness. I am a coach who will challenge your child and will try to bring out the innate competitive nature within them, which will lead to a more intense training session.

Coach Michael is very good with getting kids to learn and have fun at the same time. He’s also very professional. My son really likes his lesson.

My son really enjoyed working with Michael G. After his second session he said he learned more from Michael in two days than he had from any other team trainer or coach in his soccer career!

Michael is a wonderful coach! My 11-year-old daughter has recently started training with him and I already see an improvement in her skills and confidence! I love his training technique. He is patient and understanding and brings the right amount of intensity. My daughter really enjoys her sessions with him. I would recommend coach Michael to anyone!

Michael brings enthusiasm to his coaching style. He focuses on speed and ball control and keeps the kids engaged

First Training session for my 11 and 13 year old daughters with Coach Michael today. Awesome session for both that left them tired but really understanding what they need to work on. They mentioned to me after the sessions that they really learned alot and are up to the task of doing their "homework" prior to their next session with Coach Michael!

Coach Michael is fantastic. He has trained my son only a few times, and we already see improvements in his game. Michael is always on time and has the training module set up prior to us arriving. Michael strikes the right balance of intensity and patience, which is important for younger children. Michael provides regular progress updates as well.

Coach Michael is awesome! He’s communicates well and our son looks forward to seeing him every week. He’s extremely knowledgable and is very encouraging to our 9 year old who has never played soccer before! Looking for a great coach? Look no more! Hire Coach Michael! You won’t be disappointed!

Michael was a great coach, very patient with me and although I am an adult playing on a league he definitely helped me practice my ball touches and much needed foot work. Everything I needed and more! He was great, had a lot of fun and can’t wait to book more sessions with him!

Coach Michael is awesome!!! My daughter was not feeling well and he had such patience with her. I see her skills improving only after 3 days. Coach Michael is dedicated to the skill building of his students. He also knows how to motivate his students when they feel they are not doing so well. You should definitely choose him as a coach. His knowledge and skills will help to improve your child physically and mentally when it comes to soccer!!!

Good understanding of the small things which need to improve to become a better player. Well-structured lesson and keep things interesting. Thank you!

Michael is very knowledgeable and knows how to relate to children. He made our son feel comfortable and clearly demonstrated each drill. He is professional, responds very quickly, he’s energetic and was on time. He made this process simple and worth it.

My 6 year old son loves playing soccer but his skills and knowledge of the game are understandably limited as is my knowledge. He just started playing in a recreational league two months ago but doesn't get much individual attention. Coach Michael worked with him for one session were he accessed his skills and coached him showing him several things targeted specifically for him. Coach Michael is very friendly and professional providing lots of encouragement. My son had a great time, laughed a lot, and played hard. After just one session my wife and I noticed improvements in his confidence and skills at his next soccer game. He wants to take more lessons. We signed up for additional sessions with Coach Michael.

My daughter has been working with Coach Michael for several months and we are very pleased with the results that we have seen so far in a short amount of time. Coach Michael is very patient and also very encouraging. My daughter is becoming more and more proficient in her technical skills. Coach Michael has even put together a personal training plan for my daughter. I have no doubt that with Coach Michael she will continue to improve and excel at a high level. I would definitely recommend Coach Michael to anyone who wants to enhance their soccer skills.

Our son (now age 10) played youth rec soccer at a young age and after a couple seasons of taking a break started asking to go back to soccer. At age 9, we re-enrolled him into the sport. Since many of the players had been playing non-stop from young age, our son, while he loved the game, was behind on skill sets and lacked experience overall. Michael has trained our son and in those trainings has helped him learn the game overall as well as better coordination, ball handling, and overall skill sets to be able to better perform on the field. The conditioning from the trainings is also a huge plus. Our son can out run any player on the field and often doesn't get as winded as most other players. His coach this past season has commented on his ability to make moves on the field that he hasn't seen from other players at this level. Michael has helped him tremendously, and we plan to continue training with him long term as a result. He's very positive, yet realistic with players. He pushes them to their full potential in a way that is beneficial to positive outcomes. Our son works hard in the sessions without complaint and often is asking when can he train again with Michael. If your child is serious about the sport and wants to improve his/her skills overall, I would highly recommend working with Coach Michael.