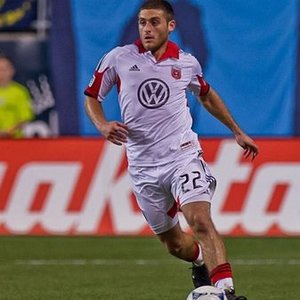 Professional soccer player for D.C. United with experienced coaching background of all ages and skill levels. Specializing in technical and tactical soccer training in the DMV area View all coaching experience

I'm currently a professional soccer player for D.C. United in Washington D.C. I'm from Cleveland, Ohio and moved to Washington after being drafted to D.C. United in 2011. Previous to MLS, I played four years at the University of Akron and won a Division 1 National Championship my senior year as well as graduating with a degree in Management and Marketing. I've lived and breathed soccer since I was four years old and have been coached and mentored by some of the best coaches in the country along the way. Through this coaching opportunity I'm hoping to teach and pass along all the knowledge and experience I have gained over the years.

Professional
Drafted to D.C. United in the second round of the 2010 MLS Superdraft. Started over 100 games for the black and red over a 7 year career which includes 4 playoff seasons as well as a 2013 Open Cup championship.

College
2010: During my senior year, our University of Akron team won a Division 1 National Championship (the first in school and conference history). I started all 25 matches at outside back and was part of a defensive unit that posted 11 shutouts. I played 2,208 minutes on the field making me third among all UA field players. I finished the season with five assists with two coming in consecutive matches. I was named to the All-MAC Second Team.

2009: In my junior year, I was a key contributor to Akron’s defense that set school records for goals-against-average (0.27) and shutouts (19) while starting all 25 matches. I was named to the All-Mid-American Conference First Team and was part of the Top Drawer Soccer National Team of the Week.

My sessions can be tailored to anything you're looking to improve on in your game specifically or just overall technical and tactical work as well. There is no age preference as you're never too old to improve or learn something new. 1-on-1 or group training can both be setup. If you have any questions just shoot me a message and we can work something out. Hopefully see you on the field soon.

There are currently no reviews or testimonials for Chris K.