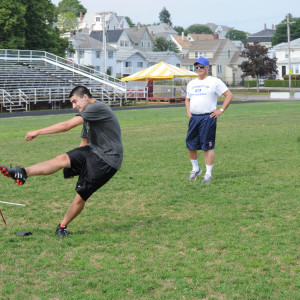 Expert kicking coach and camp director who trains all levels of kickers and punters, from junior high to the pros. View all coaching experience

I was a placekicker and punter at Gloucester High School, 1959-61;

I was a placekicker and punter at Bridgewater State College, Bridgewater, MA 1966.

After leaving military service in 1970, I found that there were no kicking camps in the New England area. I began operating the Cape Ann Kicking Academy that year.
I work with junior high, high school, college and pro kickers. A large number of my high school kickers won scholarships to kick in college. Several set high school and college kicking records.

Valuable information is provided for college recruitment and scholarships.

Coached with Doc Story at the Pat Dye Kicking camp at Auburn University, 1986-87.

Coached for New England Patriots great Gino Cappelletti at his "Boot Camp" in 1994.

Begin writing a book, Specialty Teams in 1970 and since then have met virtually every NFL placekicker and punter from the 1920's to the present.

Appeared in the mini documentary The NFL Presents: The Kicking Game, done by NFL Films in 2002.

Completed "Placekicking in the NFL: A History and Analysis" which will be released by McFarland Press this summer. It contains all the material I collected on NFL placekickers over the past 43 years. There are also a unique collection of statistic included. This 575-page book is being hailed as the most comprehensive work ever done on this phase of the pro kicking game.

Arrangements can be made to attend the NFL Scouting Combine or for older kickers, a free agent tryout

My kicking sessions run one hour and a half. I focus on foot work, steps, form and proper kicking technique for either soccer style kickers or straight-on kickers. A great deal of emphasis is placed on the mental aspects of kicking which puts my pupils way ahead of others. A large number of kicking camps do not incorporate this which is so vital in the development for an efficient and accuragte kicker. I have a pamphlet for my pupils that cover exercises, and drills to help improve their kicking accuracy and distance, The same holds true for my punters. I am also a long-time member of AFCA, the Pro Football Researchers Association. In 2008, I was recognized as the top football camp in New England by Cambridge Who's Who.

Rick is an excellent coach and teacher. He must know more about kicking than anyone on the planet. He does a great job of starting with fundamentals and building from there