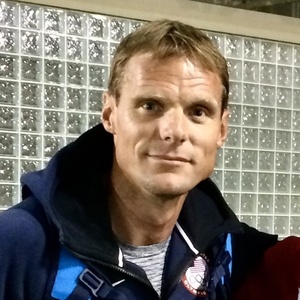 In 2018, Pyle became the first coach in US history to have led both an American male and female high jumper to a top-10 final world ranking. The 2018 season saw Jeron Robinson win the USA Outdoor Championship title with a personal-best jump of 2.31m (7’7”), win gold at the Athletics World Cup, as well as winning gold at the NACAC Championship. Robinson finished the season with a #8 world ranking by Track and Field News.

In 2015, Pyle produced a Nigerian national champion in the women’s 100m when Gloria Asumnu took the title at the Nigerian National Championships. Later that summer, Asumnu would represent Nigeria in the women’s 4x100m relay at the IAAF World Outdoor Championships in Beijing, China.

In 2014, Pyle led McPherson to a win at the USA Indoor Track and Field Championships and a 12th place overall finish at the IAAF World Indoor Championships in Sopot, Poland. Later that season, McPherson would win the women's high jump crown at the USA Outdoor Championships, jumping a personal-best of 2.00m (6-6.75) to become the shortest woman (1.63m/5’4”) ever to clear the two-meter barrier, and in turn, setting a height-over-head world record. She finished the 2014 season with the second highest jump in the world.

Collegiately, Pyle has coached at the University of Memphis, as well as six seasons at Rice University. Pyle spent one season at Memphis, and in that time made an immediate impact. In the 2017 season, Pyle’s jumpers won five medals, including four gold. That season saw sophomore Jordan Wesner sweep the conference championship titles while producing a personal-best jump of 2.23m (7’3”). Wesner finished the season with a top-10 finish at the USA Outdoor Championships.

During his six seasons at Rice University (2009-2015), Pyle coached the high jumpers and wrote the physical training for pole vaulters. He guided the Rice Owl jumpers to nine Conference USA championship medals, including six gold. Chris Pillow won five C-USA men's pole vault titles and finished his career as a three-time All-American. In 2015, Pillow would also add a USA Indoor Championships 2nd place finish to his resume, with a personal-best jump of 5.60m (18’5”). In the high jump, Pyle coached Belle MacFarlane to the C-USA Indoor women's high jump crown and outdoor All-American status at the NCAA Outdoor Championship Final in Eugene, Oregon.

The first thing we do is establish a foundation of understanding of the athlete's relevant athletic history and the ultimate goal for the athlete. When that foundation is established, an individual plan is created.

Coach Pat is overall an outstanding coach he is very knowledgeable on the track, his teaching excedes the basic drills. I definitely recommend if you are looking to improve your performance in Track and field.

Coach Patrick is a great coach. After our first lesson, I can see that he's very nice and professional and looking forward to future lessons.

Coach Patrick is very knowledgeable and informative! He provides insight on every drill and explains the reasoning behind each drill. We will be back for more sessions!

Had our first session with Coach Patrick today and it was fantastic. He is super knowledgeable around the T&F space and was completely energetic and engaged for the entire session. We immediately booked subsequent sessions and look forward to seeing our son progress over the coming weeks. Highly recommended!!