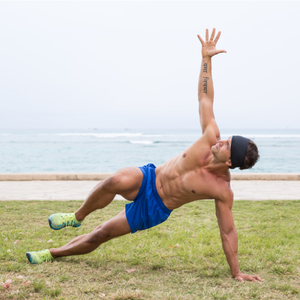 My coaching is based on my former experience as a professional athlete and backed up by science. My goal is to help my clients reach their goals and implement a healthy lifestyle. View all coaching experience

Marc has been coaching clients for over 15 years. He coached all levels from beginners to professional athletes. He also worked on 3 continents (Europe,Asia and the US) and worked with over 6000 clients in Group and private settings(All age groups). Marc holds a Bachelor of Arts in Kinesiology, a Yoga 200hr certification, NASM Performance Enhancement Specialist.

Following his soccer career, Marc became increasingly interested in functional fitness and yoga. For five years, he was a personal trainer and fitness manager for Fitness First Germany, one of the largest health-club chains in the world.

In 2010, Marc moved to the U.S. and worked for several fitness and wellness companies in Hawaii and California including Gold’s Gym in Venice, Calif. In 2012 moved to India, where he served as a national fitness manager for SportsFit World by MS Dhoni, in New Delhi.

Marc’s true love for and deep connection to the islands along with his unique vison for outdoor fitness brought him back to Hawaii. His vast knowledge and experience have led him outside the gym and away from machines. His desire to pass along his knowledge of fitness and healthy lifestyles has helped him co-found and build the most successful outdoor fitness community in Hawaii, HI LIFE ATHLETICS.

Marc Zimmermann is the creator of the HI LIFE ATHLETICS concept of strictly outdoor fitness that builds on the principles of welcoming community, positivity, and close connection to Hawaii’s unique nature.

Marc relocated to Los Angeles in December 2016. Since then he has been coaching Fitness and Soccer in Marina del Rey. Also he became part of the coaching staff at the new UPSL Soccer club LA10 FC.

In one session you can experience:
Dynamic Warm Ups, Movement Prep, Functional Training, Strength and Core exercises, High Intensity Interval Training, Calisthenics, Mobility exercises and a cool down that consists of Yoga and Pilates.

Marc is very detailed in training. He would provide small tips from diet to matches. Also he will teach how to stretch and relax at the end of each training.

Coach Marc worked with my nine year old daughter and he was great. My daughter is very shy and she was comfortable working with him after one lesson and very excited for her next lesson. I'm very excited to see the improvement in my daughter's soccer skills and understanding of the game. I highly recommend Marc!

Coach Marc has the ability to really relate to your child and bring out his or her best. Coach Marc has great experience and skills that will not only boost your child’s game, but also their confidence. Our son Alex loves working with Coach Marc.

Great coach my son is learning more everyday he come back excited and happy but what I really like is that he gives him a push to keep trying and keep learning to achieve his goals.As for me I really like that he keeps me posted with the updates and follow up makes me see that he really care.Thank you coach Marc

I enjoyed the training session Coach Marc set up at the beach. Working out in the sand was difficult and yet very challenging. We worked on speed and agility which will transfer to soccer.