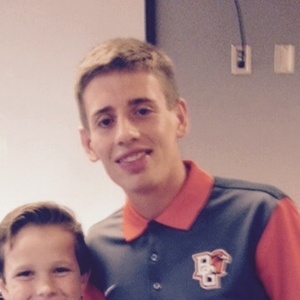 I have a lot of training soccer player experience. I played division-1 soccer and have been training players for 9 years. I normally coach high school and above. I’ve trained high school and college players in the past but have also done younger ages. No industry certifications currently but I’m working to get them.

SULLIVAN AND THE FALCONS
Finished his stellar BGSU career with totals of 50 points on 17 goals and 16 assists ... eight of his 17 goals were game winners, tying him for fifth in school history in GWG ... BGSU was 12-2-1 in matches in which he scored a goal and 20-3-1 when he had at least one point ... saw action in 77 of BGSU's 78 contests during his four years with the program, making 64 starts ... the Falcons had an overall record of 38-27-12 during his four seasons.

2016
A team tri-captain ... received the Mid-American Conference Medal of Excellence Award ... the Medal of Excellence is an award presented annually to one male and one female student-athlete from the graduating class of each of the 12 conference member institutions ... was BGSU's Male recipient of the Falcon Medal of Honor at The Ziggys, the department's end-of-year awards banquet, in April of 2017 ... the award is given to one male and one female student-athlete who embody the essence of the qualities BGSU Athletics hold important for all student-athletes ... additionally, was one of three finalists for BGSU's Senior Male Scholar-Athlete of the Year, an award that -- like the Falcon Medal of Honor -- goes to just one individual among all sports ... named to the CoSIDA Academic All-America First Team in 2016 after earning second-team honors in '15 ... became just the third student-athlete in program history to earn Academic All-America accolades twice (joining teammate Pat Flynn and Joe Burch) ... an All-MAC Second-Team selection ... named to the Academic All-Ohio Team for the third consecutive year, earning first-team honors ... named to the Academic All-MAC Team and also was a MAC Distinguished Scholar Athlete, earning both honors for the third consecutive year ... and, was named to the CoSIDA Academic All-District Team for the third-straight season ... started all 19 matches and finished third on the team in scoring ... had 11 points on four goals and three assists ... was third on the team in goals, and tied for fourth on the Falcons in assists ... his goals included the game winner vs. Marshall, and he also found the back of the net against IUPUI, Western Illinois and Fort Wayne ... two of his assists came on what proved to be the winning goal, as the Brown and Orange topped Ohio State and Northern Kentucky ... scored BG's second goal in the season opener vs. IUPUI after working a combination play with Flynn ... opened the scoring in that Marshall game, nodding home a header from Alexis Souahy in the 30th minute ... scored in the 16th minute at WIU ... picked up the lone assist on Max Auden's goal in the eighth minute vs. OSU ... also assisted on Alexis Souahy's winner with just 3:07 left at NKU ... was ranked ninth among MAC players on the Top Drawer Soccer Midseason Conference Top-20 list ... was one of five Falcons ranked in the top 20, after BG had not had a single player ranked on the TDS preseason list.

2015
Named to the CoSIDA Academic All-America Second Team ... also earned CoSIDA Academic All-District Team honors ... was named to the Academic All-MAC Team, and also was named a MAC Distinguished Scholar Athlete for the second consecutive season ... named to the Academic All-Ohio Second Team for the second-straight year ... and, was one of three finalists for BGSU's Male Junior Scholar-Athlete-of-the-Year award at The Ziggys, BGSU's Athletics Honors Night ... started all 19 matches, playing 1644 of a possible 1756 minutes ... had 17 points on six goals and five assists ... tied for the team assists lead, and was second on the Falcons in both goals and points ... led the Brown and Orange with three game-winning goals ... BGSU was 5-0-1 in matches when he scored at least one point ... was inducted into Chi Alpha Sigma, the National College Athlete Honor Society, in February of 2016 ... recorded a pair of four-point games ... led the Falcons with 61 shot attempts and 28 shots on goal ... scored BG's third goal vs. SIUE, as the Falcons found the back of the net three times in just over four minutes in the season opener ... two days later, had a goal and two assists in BG's 4-1 win over Western Illinois ... nearly scored a second goal in that game, as a shot was deflected by the 'keeper and caromed off the crossbar ... had a three-point night as BG blanked Cleveland State, 3-0 ... scored the opening goal with under four minutes gone, then had the primary assist on Pat Flynn's first goal of the night in the ninth minute ... scored two goals, including the winner, in BG's come-from-behind victory over IPFW ... his first goal tied the game at 1-1 early in the second half ... then, after the Mastodons retook the lead, BG tied the contest with under 13 minutes to go, before Sullivan scored again with just over nine minutes left ... in addition to scoring two goals, he also blocked an IPFW shot off of the goal line with under seven minutes remaining ... for his efforts in that IPFW game, was named the MAC Player of the Week on Sept. 21 ... had three points, with a goal and an assist, at IUPUI ... had the primary assist on the first goal of the match, as Jacob Roth headed home his corner kick ... then, scored the tying goal with under eight minutes left in regulation ... split the West Virginia defense with a pass to Flynn late in that BG win ... Flynn was taken down in the box on the play, leading to a penalty kick that gave the Falcons a 2-0 lead with 14 minutes to go ... had an assist on Jacob Roth's goal late in the first half of the win at Wright State, as Roth headed home his free kick ... hit the crossbar with a shot early in the second half of that game.

2014
Named to the Capital One Academic All-District First Team ... chosen to the all-league second team by the College Sports Madness web site ... also named to the Academic All-MAC Team ... and, was named a MAC Distinguished Scholar Athlete in the first year of that award's existence ... additionally, was voted to the Academic All-Ohio Second Team by the OCSA ... played in 20 matches, starting all 20 ... had 16 points on five goals and six assists ... finished third on the team in scoring, and was tied for second on the Falcons in assists ... deadlocked for third on the team in goals ... tied for fifth in the MAC in assists ... was sixth in the league in points, and was seventh in points per game ... tied for seventh in the MAC in goals, ranked ninth in shots and tied for ninth in goals per game ... two of his goals proved to be the game winner, vs. Niagara (Sept. 5) and St. Bonaventure (Sept. 28) ... scored a pair of goals in the Niagara match, which was part of the Duquesne Invitational ... was named to the Duquesne Invite's All-Tournament Team ... at SBU, scored what proved to be the winner with under 14 minutes to go in BG's 1-0 victory ... had three points, with a goal and an assist, vs. Findlay (Sept. 2) ... also had a goal in the Falcons' win over Northern Illinois (Nov. 8) that clinched a berth in the MAC Tournament ... had two assists against Eastern Illinois (Sept. 19), and also had a helper on the overtime GWG in the MAC Tournament's semifinal-round match vs. West Virginia (Nov. 14) ... had an assist on the winner, late in the second half, of BG's 1-0 win at IPFW (Oct. 1) ... also had an assist at Michigan (Sept. 16), on what also proved to be the winning goal in another 1-0 victory ... played a total of 1809 minutes on the season ... was listed as the No. 18 player in the MAC in Top Drawer Soccer's midseason player rankings.

2013
Played in all 19 matches in his first season with the Falcons, starting six ... had six points to tie for fourth on the team ... scored two goals -- both of which proved to be game-winning goals -- and added a pair of assists ... tied for the BG lead in GWG ... deadlocked for fifth in the MAC in game-winning scores ... those goals came on the road against Buffalo (Oct. 4) and Davidson (Oct. 19) ... the UB goal came in the second half of a 1-0 MAC win ... headed home Vlad Lekarev's cross at the far post early in the Davidson match ... assisted on Danny Baraldi's late goal in that Davidson contest, for a three-point match ... other assist came vs. Detroit (Oct. 8) ... his 990 minutes included a season-high 90 at Akron (Sept. 21), as he played the entire contest vs. the nationally-ranked Zips ... had a goal in the Falcons' exhibition win over Cincinnati at Cochrane Field (Aug. 24).

HIGH SCHOOL
A three-year letterwinner at Naperville North H.S. (‘13) under coach Jim Konrad, a BGSU men's soccer alum ... earned All-State honors as a senior in 2012, after leading the team in scoring with 16 goals and 20 assists ... a three-time All-DuPage Valley Conference selection ... finished second in school history with 36 career assists ... helped the Huskies to a combined record of 57-9-3 over his last three years, with a conference championship in all three seasons ... had 14 goals and 18 assists as a junior, when North went 21-1-1 overall ... scored five goals and added 10 assists in his sophomore campaign, as the Huskies finished fourth in the state ... team captain as a senior ... National Honor Society ... Illinois State Scholar ... named to the Honor Roll in all eight semesters of high school, and was a Distinguished Honor Roll recipient in six of those semesters.

I personalize all of my sessions to what the player is looking to get better at. Throughout my career I’ve always been an attacking center midfielder so I have the ability to teach both offense and defense. I make sure to do personalized 1 on 1 drills that push the player to become more technical and have a better understanding of the game. I like to do quick drills that are high intensity and get a lot of touches on the ball.

Joe S. has not uploaded any photos yet

There are currently no reviews or testimonials for Joe S.