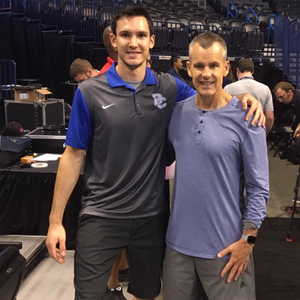 Former four year collegiate athlete. 4 years of coaching in 6A high school basketball. Experience in coaching camps for all ages, as well as working 1 on 1 and with groups View all coaching experience

I played four years of college basketball at the Division II level, during those years I helped coach several camps for all ages in the summers (both boys and girls). After graduating from college, I took a job teaching and coaching at the high school level and am now in my third year of coaching 6A boys high school basketball. This last summer I helped coach both a middle school and elementary basketball camp (boys and girls) for our district, while also coaching in our high school summer league and team camps that we attend. I've also helped coach a pro-camp run by a friend who currently plays basketball overseas at a high level, we worked with several former Division I players, as well as guys who play or were playing pro and overseas basketball. Along with the work I've done through camps, I've been working my high school guys out (constantly) through skill/speed/weight training. I'm always looking for new ways to challenge and push them to continue to grow and develop their shot, handles, and basketball skill level.

I'm in charge of working with all our guards through skill work, as well as conditioning. I've also implemented strength and conditioning workouts for our program(Varsity/JV/Freshman). Besides coaching, I'm wanting to become a personal trainer/certified strength and conditioning coach. I'm constantly looking to learn and grow through both basketball and strength training, so that I can get the most out of my players, and so that they can strive to be the best athlete possible.

Playing any level of college basketball under good coaching is definitely an accomplishment, especially with the coaches I was blessed to learn from during my time in college. I attended school at Southern Nazarene University in Bethany, Oklahoma. Being around a winning program and winning coaches at the collegiate level will greatly impact you for the rest of your coaching career and also your life.

--I'll always start a workout or practice with a dynamic warmup, which involves hip/knee flexibility and mobility, among other things. A good warmup should be about 10 minutes
--I'll usually start the workout with form/progression shooting, which is what I used to do on my own as a player. I definitely want all my players to have a good fundamental shot, we'll continue to work on it and grow through our sessions.
--I'll then get into a variety of ball handling/footwoork/fundamental drills. These drills constantly vary between speed, footwork or also 1-2 balls.
--I also will incorporate some finishing drills with the ones above, while also working on both sides of the rim, with both hands.
--As we get deeper into the workout we'll get up shots both just catch and shoot and also on the move. We'll really critique our form and footwork here while working on catching the ball in different spots while also working on a good release point.
--I then like to do a combination of drills which use both ball handling and shooting. A lot of catch off the dribble, while working on moves and different shots through 1 and 2 dribble pull-ups from both inside and outside the 3. We'll eventually get into reading the defense, and how to create space and create your shot/get open.
--At this point we should be at least 45min into the workout. Depending on how I'll feel where we're at, I might finish with some scenarios which will vary on what the player needs work on. We'll also finish with a certain amount of free throws to make (while we're tired) to simulate a game.
--I'll usually teach certain stretches after we finish, we'll build on these as we go and the player will learn and also do them on their own.

These sessions obviously depend on the age of the player, a younger player needs more fundamental work and developing their shot and also handles. With an older player it'll obviously be a tougher and more demanding set of workouts.

Great first session. Much needed focus on the little things. Very clear explanations and examples helped him to understand "the why" rather than just going through the drill.

Coach Cortesio is a great coach to work with. He took his time with my son to understand what he needed help with and the things he wanted to improve. He made sure my son worked hard and learned something at every session. I would recommend him to anyone that wanted to improve their game and have someone push you to be better.

My son has completed several sessions with Coach Jacob and they have been very productive. I have an 11 year old son who just plays rec ball but wanted to get better. (Especially in regards to his shooting) It’s tough to shake the old habits but Coach Jacob has been patient and has even recorded his shot to replay and explain the correct form back to him. The sessions consist of a full 60 minutes of work. Each session continues to build on the previous one and my son is starting to get more consistent in his skills. The sessions have included many aspects such as ball handling, shooting, driving etc. At the end of each session, Coach Jacob gives feedback and suggests areas to continue to work on outside of his session. My son looks forward to the sessions even though he knows he’s going to be working hard. I would recommend Coach Jacob for anyone that wants to get better and doesn’t mind putting in work.

Coach Jacob was great! He told my son exactly what he needed to work on in order to improve his shot. He also gave him some recommendations on things he could do to improve his ball handling. I would definitely recommend him!

Coach Jacob got my son started right away and didn’t waste anytime during the session. He went through a number of different exercises with my son and also spoke with him in regards to his goals and the plans he has for him as well. So far so good 😃

Coach Jacob was very patient and gave great feedback. Appreciate him making time to train during the holiday. Definitely a forward thinking coach in the way he trains and communicates. We are looking forward to working with Coach Jacob again.